During the break between scenes, I went over to visit with Vivian and showed her some sketches I had made of Julie as a young girl. Meanwhile, had come over to talk to Patty and Kelly, so I went over and showed some photos of Liza that I had recently purchased from her fan club. I also asked her if she had met Liza. She said ‘yes,’ her date had introduced them, but they were at an event where there were so many photographers and newsmen around, they couldn’t talk. She said, Liza grabbed her arm and pulled her into the picture that was being taken of she and Desi. After telling me that, turned back to Patty and Kelly, and ignored me, so I went back to talk to Vivian. During the break, I also went out and ate some dinner and had a cup of tea.

Tonight, Katrina was there with Joan’s little girl. Joan’s husband had the little boy with him. Vivian told me that Katrina gets everything she wants from Joan.

“She always threatens to leave,” said Vivian, “and Joan is afraid she will. She told Julie, ‘If I didn’t have Katrina, I couldn’t work for you, and I don’t know what I’d do.”

Katrina supposedly got the job working for Joan when she came to the studio to see the show. She was talking to Alice Ghostley that day and told her if she didn’t get a job, she’d have to go back to . So introduced her to Joan, whose lady was leaving.

“So would I,” I said, only half meaning it. I wanted to sing and act.

“But Joan doesn’t know that she would get anyone else,” Vivian responded. 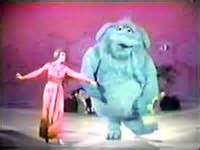 Then, Julie and Thog sang and danced “Oh, Babe (what would you say).” It was one of the most charming things. Maybe because I had been through so much, being put out of the studio and had to listen to all the negative comments about Julie, who inspired me so much. I don't know why, but this number touched me in a special way. There was such love and innocence about it. That night, we all laughed and applauded at the end. Even Emma applauded. But later, whenever I heard this song, it would bring tears in my eyes. For me, it was one of the loveliest and most sincere moments at The Julie Andrews Hour.

[As a side note, Jerry Nelson, who played many roles on the Muppets, was also the person who played Thog. I really wanted to interview him for my book, and came so close. Last summer, I finally found someone who forwarded my email to Mr. Nelson, but only a week later, on , Jerry Garcia passed away. What a talented man and what a beautiful spirit he had. More on Jerry Nelson when I review the 20th Episode of The Julie Andrews Hour.]
To read more about Jerry Garcia, please visit:
http://muppet.wikia.com/wiki/Jerry_Nelson 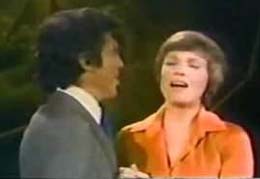 Following “Oh Babe,” Julie and Sergio taped a scene from the opera, Samson and Delilah. It was already pre-recorded, so they simply had to lip-synch it and play the roles. I thought, “Now, we’re going to loose Emma.” After all, it was around and Emma was sure not to be interested in this scene. For a moment, she slouched in her chair. I thought she looked a bit uncomfortable, but she stayed and watched.
Julie and Sergio went through the operatic scene about three or four times By now, half of the audience was gone and I wanted to move up, but we (“regulars”) soon found out we were not allowed to.

After four takes, Julie sat in her chair, or rather, the one that said “Steve” on it and Sergio sat beside her. Emma was stood next to her mother, holding her arm and Blake was behind Julie. Together, they watched the results of Julie and Sergio’s work shown on the monitor. It seemed so nice that they were all together on this one night.

After that, they appeared to be taking a break, so I went out to get some food. A few minutes later, when I got back, everyone was coming out, saying that Julie had done two promos and that was all! It was a rap. Little did I know, as I turned around walked out the door of Studio C, it would for the last time.

I asked Kelly if she would give me a ride, and she agreed. She was going to take home. had smashed her car driving home one night. She said she had forgotten she was not in and had driven on the wrong side of the street.

While we waited to leave, Patty and Kelly stood by the pay phone, pretending that they were talking on it and waiting for Julie to drive by. Finally, a black Cadillac went by.

When the girls came over to us, they were jealous because some rich twins had gotten a ride home with Julie. “That’s because they have money,” they commented. I thought the two girls in the car with Julie should have been Emma and Jenny, so I wasn’t sure what Patty and Kelly were talking about.

Listening to the girls talk, I learned the reason that Emma and Jenny had been at the studio so late that night. Julie had a regular babysitter, but apparently the previous week he had gotten bored on the job and drank alcohol all night. When Julie and Blake came home, he was drunk. Anyway, to make sure that situation didn’t happen again, Julie had the children stay at the studio and come home with her. I’m not sure where Geoffrey was.

When I arrived at International House, it was unusually early, before , and everyone was still awake. It seemed strange to arrive back at that time.

Please visit: http://www.JulieAndrewsHour1972.com
To see a list of blog subjects with links back to this page.

All photos here are for entertainment purposes only.
Posted by Michelle Russell at 5:08 PM