The eighteenth episode of The Julie Andrews Hour, shown on the ABC network , took something of a different format than the previous shows. This show had four separate segments, and neither of the guest stars--comedian Sid Caesar and singer John Davidson—appeared in a scene with the other.

To open the show, Tony Charmoli choreographed a rather unusual musical number, though it was also the costume design which made the dance unique. In the opening shot, Julie appears, looking gorgeous, with her male dancers huddled behind her. Once the group spreads out in the dance, we realize that everyone is connected by the costume they are wearing. The medley/dance, which includes “On the Sunny Side of the Street,” is quite funny.

For the next segment, Julie Andrews and Rich Little appear together for a series of duets. As Julie explains, working with Rich, she can sing with anyone she likes. In the first duet, Rich croons as Bing Crosby, followed by musical impersonations of George Burns, Jack Benny, Humphrey Bogart, James Stewart and Walter Brennan.

This segment of the show is very loose and gives us a chance to see Julie singing in a rather informal way. During the bit on George Burns, she sings “I Could Have Danced All Night,” and produces the most glorious sounds with as much ease as the average person might sing “Ring Around the Rosie.” Her singing here seems almost effortless and is truly remarkable.

When Rich Little plays Jimmy Stewart trying to sing on key, he is so funny,  Julie, who is attempting to sing with him, has a hard time not laughing.

***
For the next section of the show, Julie Andrews, along with the eight Tony Charmoli Dancers, presents the “Look to the Stars” astrology segment.  Whether the show had some complaints about this segment is not known, but before they begin, Julie states, “Whether we believe it or not, astrology is fun to contemplate.”

Aquarius is the sign of the week, and, of course, that famous song from the musical Hair is the opening number. This portion of the show is photographed quite beautifully with the elegant tall, curved mirrors, and wonderful lighting.

Julie wears a lovely deep blue halter gown and looks quite beautiful as she begins the tribute to persons born under the sign of Aquarius by quoting Lord Byron’s poem, She Walks in Beauty Like the Night.  Julie and the dancers, wearing hats, then join in a short but cute tribute to Jimmy Durante, by singing his theme song, “Inka Dinka Doo.” President Lincoln is also paid tribute too, and it’s noticeable that an African-American dancer/singer joins the group here and remains for the balance of the Look to the Stars segment.

The musical numbers here include Julie singing Victor Herbert’s “I’m Falling in Love with Someone,” Carole King’s “Too Late Baby” and Harold Arlen’s “Get Happy,” which closes the segment.

In the next scene, Julie announces singer, John Davidson.

John Davidson’s first musical appearance, against southwestern architecture, is quite striking. Backed only by his guitar and a harmonica, he sings “Alone Again, Naturally.”

No doubt, his appearance on the show caused some stir. Young, handsome and talented, at the time, he was one of the newest musical sensations. His version of this song was quite effective, and as he comes to where Julie is standing, we see her crying (really, just acting.) Davidson attempts to comfort her and finally gives her a hug to make her feel better. In that moment, she turns to the camera and winks, letting us know what she is about!

Born in on , John Davidson attended high school in . During this same time, he worked as a model. While attending , he worked three seasons at the Denison Summer Theater, where he appeared in 30 plays. After graduation, Davidson appeared on Broadway, playing Bert Lahr’s son in the musical Foxy.

During the late 1960s, television producer Bob Banner molded John Davidson’s career. Along with his work on television and in theater, Banner was responsible for procuring a Columbia Records contract during this time, which led to 13 record albums and appearances in ’ major showrooms. By 1973, John Davidson was a household name.

In 2013, Mr. Davidson is working in in The Fantastiks. In March, he will be appearing at the Atlantis Country Club in Atlantis, . (See below) 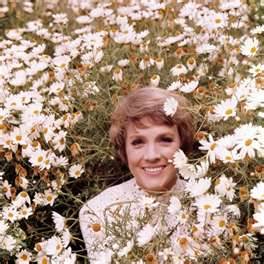 The next scene is a dream-like affair with John and Julie lying amidst wild grass and daisies on a country hillside. Although this a complete departure from all previous musical numbers on The Julie Andrews Hour, the scene certainly resonates film styles of the period, and this musical number is shot like a film.

Singing “Lazy Afternoon” and “Feeling Good,” Julie and John lie dreamily in the grass. At one point, he even strokes her hair. It’s a beautifully photographed and the pair do a beautiful job singing together. This duet would make a wonderful and unique addition to Julie’s Duets CD!!!

As a side note, this scene, with John and Julie dressed in jeans and polo shirts, was no doubt the one during which Julie’s stand-in, Sharri Zak, commented, “That’s the real Julie.”

The last portion of Episode 18 is a big departure from the usual Julie Andrews Hour. For this segment, famed comedian Sid Caesar (or the writers) decided to create comic version of the most popular film at that time, The Godfather. For this version, Caesar would play the main character, whom they named “Grandpappy.”

Sid Caesar was born in on . As a young boy, waiting on tables in his parents’ restaurant, he learned to mimic accents. At the age of fourteen, Caesar, who could play saxophone, went to work in the Catskills. Although he intended to become a musician, even attending classes at Julliard and playing with the U.S. Coast Guard band while in the service, his life would take another turn. After the war, his first job was the opening act for comedian Joe E. Lewis, and the rest is history.

After appearing on numerous television shows, in 1950 Sid Caesar appeared on the first episode of The Show of Shows and became an overnight sensation. A few months later, he returned to television with his own Caesar’s Hour, a sketch/variety show. In his show, films, television shows and operas were turned into satires by his writing team. In the same way the comedians of the old silent pictures had, Sid Caesar created an interwoven style of comedy and pathos. Over the years, Caesar was nominated ten times for an Emmy Award, winning three times. He has also received three Lifetime Achievement Awards in the field of comedy.

The scene opens with Caesar and four other actors, who are not named or credited. A large middle-aged man has come to request “grandpappy’s” help. Dancer Jerry Trent plays a waiter whom Caesar mistakes as his grand nephew. The way he acts with , it’s difficult not to imagine the dancer not breaking up, but he appears not to move a muscle.

At one point, while describing his business as a mobster, which includes “breaking legs,” Caesar begins outrageously singing about his job to “My Favorite Things.”

When Michael (Julie) tries to convince her father that he should stop being a mobster, he insists that he needs the 8 million dollars a week that he makes.

“Eight million a week,” she asks.

In an unusual move, at the end of the show, Julie has a solo. Dressed in a golden gown, with the crystal tree in the background, sending beams of light around her, Julie sings “Baubles, Bangles and Beads. Unfortunately, my version of the show does not include this song.

Although this show was not one of the most satisfying as a whole, it does contain segments that are worth seeing.

Coming next: Days Leading Up to the Last Studio Visit

Visit the list of show topics with links back to this site:
http://www.JulieAndrews1972.com

All photos here are for entertainment purposes only.
Posted by Michelle Russell at 8:38 PM