Among the truly special episodes of The Julie Andrews Hour is the 16th episode, which aired on . It is a show full of happiness and boasts a very special guest, Maria von Trapp.

The show opens with skiers on the snowy slopes of . Via technology, Miss Andrews is soon seen flying down those slopes. While skiing, she introduces guest star, Jim Nabors, who shortly thereafter is taken out by a tree. Julie’s second guest star, singer Eydie Gorme, arrives on the scene like Mary Poppins—descending from the sky, holding an umbrella. After this introductory segment, during which Julie sings “I Whistle a Happy Tune,” she zips from the slopes to the studio stage.

Shortly after arriving in the studio, Julie introduced us to Maria von Trapp. Maria, of course, is the woman Ms. Andrews portrayed so beautifully in the film, The Sound of Music. Her story is known to millions around the world. When Maria appeared on The Julie Andrews Hour, it was six days before her 67th birthday. A strong woman, nearly as tall as Julie, she wears her native Austrian costume, and informs Julie that early that morning when she left her present home, a ski lodge in Stowe, Vermont, the temperature was 28 degrees below zero.

In answer to Julie’s comic, round-about question as to how she did playing Maria in the film, Maria von Trapp tells her ‘fine’ but adds that her yodeling in “The Lonely Goatherd” was not quite up to par. As a result, Maria teaches Julie to yodel and the two yodel together.

After intermission, we find Julie Andrews and Maria von Trapp seated on the “Getting to Know You” set; it is a cheerful setting of white wicker with yellow cushions and a silver tea set.

Maria has no trouble talking about her life. When Julie asks her what happened after they went over the --the last scene in the film--Maria tells her story. In one day, she says, the family went from being quite wealthy to living as penniless refugees with no rights. They traveled from country to country, finally turning their hobby, singing, into a way to make money and survive. Maria has some very humorous stories to tell, and as she tells Julie about her life, likely every person in the studio audience was held in awe. It is at this moment that we realize the reality of the story and the fact that we are hearing it from the person who actually lived it. At the end of their talk, Julie and Maria sang Edelweiss together. Julie Andrews’ affectionate hug of the real Maria von Trapp was obviously heartfelt...
***

The second half of Episode 16 opens with Julie and Eydie Gorme standing in a bar, singing “I Am Woman.” Julie Andrews is a great singer and Eydie Gorme fabulous as well, but it’s a good bet that when thinking of female stars singing duets, no one ever thought of these two women together. Be surprised! They are fabulous! 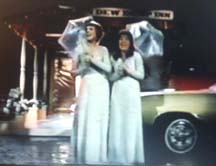 Following the modern duets and scene, the balance of the show takes us into the past---down to before the Civil War. This mini-musical with story, characters, music and dancing is something would likely never be done now, but it’s quite wonderful! 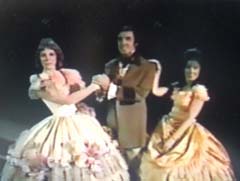 The scene opens with Eydie, Julie and Jim Nabors singing “Those Were the Days.”Julie and Eydie are both wearing ante-bellum hooped skirt gowns. Julie is particularly gorgeous, with a wiglet of curls and a gown with flowers sewn on the skirt and bodice.
The scene takes place in a lovely Southern home with two sisters, Daffney (Julie) and (Eydie). A local bachelor, Beauregard (Jim Nabors), is smitten with Daffney and asks her to marry him, singing “Mandy.” When she complains that her name is not “Mandy” he says there are no songs for her name because how could you rhyme words with a crazy name like “Daffney.” The dialog is quick and witty.

After Beauregard asks Daffney to marry him, the couple (Jim and Julie) sings a beautiful duet, “Make Believe” (Showboat). Meanwhile Daffney is pining for Rhett the butler (Rich Little) who appears to be an exact copy of Clark Gable, mustache and all. Daffney’s sister, is pining for Beauregard (Jim Nabors), and heartbroken that he wants her sister, she (Eydie), sings her hit, “Didn’t We.” It’s amazing, positioned as she is, bent over on the divan, that Miss Gorme can have that fabulous voice coming out of her. Listening to her, one cannot help but be totally blown away by her voice. In this writer’s humble opinion, there are no singers on the present scene who can match the beauty and excitement of Eydie Gorme’s voice. Jim Nabors, who is still singing, has a glorious voice. A native from Alabama who has always had something of a humble down home way of speaking, it is always a surprise to hear that deep, rich voice come from him, as it does when he sings “Mandy” and “Make Believe.”

The 16th episode of The Julie Andrews Hour is one of the few taped almost entirely before a live audience. The sense of fun, freedom and enjoyment in the show itself adds greatly to quality of the performance. Even as Julie sings the final notes of her closing song, “Time Is My Friend,” her face is full of joy, showing us what a wonderful time she had doing the show. We, the audience have had a wonderful time as well. Thank you, Julie, and all those involved! 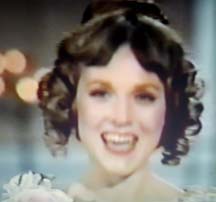 Much of this blog has been edited out toward the release of a new book on the subject....
For more information on Julie’s guests, please visit the following:

A complete list of The Julie Andrews Hour blogs with links to this site may be found at:  http://www.JulieAndrewsHour1972.com

All photos shown here for entertainment purposes only.

If you would like to see The Julie Andrews Hour released on DVD, along with possible music CDs, including a duets CD with Julie Andrews and her guests, please send a respectful e-mail to:  dan.gopal@itv.com
Posted by Michelle Russell at 8:13 PM