Episode 15 - "Two on the Aisle" with Keith Michell

On , ABC aired what was intended to be one of The Julie Andrews Hour’s most ambitious shows. Julie’s only guest was multi-talented Keith Michell, who had recently won an Emmy for his unforgettable portrayal of King Henry VIII on the PBS series, The Six Wives of Henry the Eighth. In addition, Michell had recently appeared in the London production of Man of La Mancha.

Episode 14 would be Julie Andrew’s first show of 1973. Appearing shortly after New Years, it was no doubt meant to be a kind of holiday celebration. In addition, it would be the last show to appear in the old timeslot, Wednesday at 10pm. At the end of the show, Julie announced that beginning next week The Julie Andrews Hour would be shown on Saturdays at 9:00pm, 8:00 Central. By now, it was no secret that the ratings were not as hoped and both ABC and the producer were scrambling to improve them. 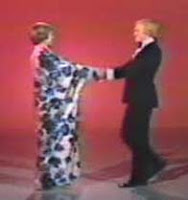 For the opening, Julie appeared in a long blue and white satin coat. After introducing Mr. Michell, she presented him with his Emmy. Then the pair were off, literally, to the show. The theme, “Two on the Aisle,” took the couple to the theater where they would view a series of scenes from various plays, in which they had the starring roles. The only other persons on this show were a few of the male dancers, who during the first scene, served as ushers and seated them in the theater. The other audience members on this rather mod set were mannequins.

Over the next hour, Julie and Keith ran the gamut of theatrical productions. The first scene was a portrayal of The King’s Breakfast by A.A. Milne, a poem that Julie said was one of her favorite when she was a child. Shot against an illustrated background, the pair, who portrayed king and queen, dairymaid and cow, appeared to have come alive in an illustrated children’s book. Their portrayals are wonderful. Julie is especially wonderful as the queen, when she speaks in a rather deep, haughty voice.

The second scene, a theatrical music piece, “Mack the Knife” finds Julie and Keith on rather modern set with steps and scaffolding. The pair are dressed in proper English men’s attire that includes bowler hats. Julie often plays Keith’s shadow, creeping behind him and then disappearing. The director uses a kind of stop action camera work with editing; the pair suddenly disappear and then reappear 4 or 5 feet away. The number is interesting, though not one of the best on the show.

The third scene is from The Applicant, a play by Harold Pinter about the future in a computer-aged society. In the scene, Keith Michell, wearing a fright wig, plays a very gawky physicist applying for a job. Julie Andrews is a sort of Eve Arden/Nancy Kulp character, proper and completely focused on the job at hand – testing the applicant for a job. The scene progresses to a hysterically funny sequence where Julie questions Keith, who is hooked up to electrical wires, about his personal responses and life. By the end, the whole experience has sent him over the edge. The scene defies description.

This rather over the top comic scene is followed by Shakespeare’s The Taming of the Shrew with Keith Michell playing Petruchio, who is intent on wooing the lovely young Kate, played by Julie Andrews in a long, brown wig. Kate, of course, is a girl who would not be wooed, and this leads to verbal confrontation and then physical confrontation. Both actors are wonderful in this scene, only making us wonder how much more wonderful would they have been if they had the luxury of appearing on stage night after night, working on the rich subtleties that develop with the repetition of a role. As far as we know, this is the only time Julie Andrews ever played Shakespeare and she shows great ability.

This scene from The Taming of the Shrew, although considered a comedy, is a rather intense scene with a lot of physical struggle and fighting. The scene was taped without an audience and had a laugh track added later, which unfortunately doesn’t seem to enhance the scene.
The fourth scene, from the delicate and witty English comedy, The Importance of Being Ernest by Oscar Wilde, is a nice break from the intensity of the previous scene. In it, Julie plays Gwendolyn, a young woman who believes that she can only love a man by the name of Ernest. Michell plays Jack, a man only pretending to have the name of Ernest so he can marry Gwendolyn. Julie is very funny as she tells Jack that that the name “Ernest produces vibrations” and “Jack produces no vibrations.” Earlier in the show, the sets had a rather modern, spare appearance but for this scene, the pair appear in a fine drawing room.

The Importance of Being Earnest marks the first half of the show. At Intermission, Keith Michell and Julie Andrews go “outside” to discuss the show and charmingly get into an argument. She thinks the “actor” in the play brilliant and he does as well, but when he says that the “actress” is “stepping on his lines,” Julie becomes incensed and calls him a “male chauvinist.” It’s all very funny, especially in the context of 1973, when women’s liberation was a big deal and caused many an argument. 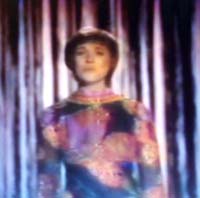 The second half of the show begins with something we were waiting for – music! Julie appears in the shadows of the stage, wearing a gown that dazzles. The gown is black with patterned bright flowers and gold sequins. The flowers on the gown are also sequined and beaded and, as Julie sings “On A Clear Day,” she literally sparkles.” Begun in close-up, quietly, the song concludes with high energy, showing Julie full-length standing on stage. It is, perhaps, one of the best moments of the show.

The next scene takes us into the future. Julie is a little girl in a completely fabricated garden. She explains that she gathers leaves off the tree in fall and puts them back on in spring. Keith then gives her a real apple to eat, something that is shocking and wonderful to her. This little scene is the lead in for Keith Michell’s solo, “Consider, What Will You Leave.” It’s a song that seems even more poignantly relevant in 2013 than it did in 1973. Michell gives a fine, intense performance. 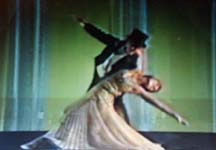 The ninth segment of this show is a masterpiece beyond anything else in it, and, in this writer’s humble opinion, as grand as anything on the entire series of The Julie Andrews Hour. For this number the pair dance to their pre-recording of “Dancing in the Dark.” The set is glorious, as are the costumes and music. In the middle of the number, Julie appears, dazzling in her gold gown, singing “He dances overhead…” It is sentimental and lovely with a background of stars. In the final segment, as the dancers, Julie and Keith, join together to dance once more, the use of mirrors is stunning. This musical number with choreography by Tony Charmoli is a work of art, simple, glorious, and unforgettable!

For the final segment of the show, Julie and Keith play Edith and Edward, a couple on their honeymoon in 1911. The scene is from Noel Coward’s Cavalcade. The couple’s conversation is sentimental and playful as they speak of love and death while standing on the deck of a ship in the moonlight. The scene is photographed beautifully and we are drawn into the charm and sentimentality of the moment. Then, as they move away from the deck, we see the name on the lifesaver - “Titanic,” and in that second we realize that this is indeed the last night of their lives. 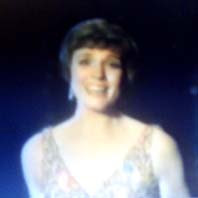 Now the show is over, and from their seats in the audience, Julie and Keith sing “This Was a Lovely Way to Spend an Evening.” The two stars seem happy and relaxed. Julie announces her next show and then sings, “Time Is My Friend,” with Keith holding her hand. These moments seem relaxed and off the cuff, though all was planned and rehearsed. It does seem as if we’ve spent a lovely evening with them.

So began The Julie Andrews Hour in 1973.

Remember you can find a list of all The Julie Andrews Hour blogs with links back to this page on:    http://www.JulieAndrewsHour1972.com

If you think The Julie Andrews Hour should be released for the public on DVD, along with music releases of Julie and her guests, please e-mail a polite request: dan.gopal@itv.com
If you prefer, you may look up ITV in or , and send a letter there.
Coming Up Next: Events Leading Up to the Next Closed Set of the Julie Andrews Hour

Note: All photos here are for entertainment purposes only.
Posted by Michelle Russell at 9:54 PM