In the Studio with Julie Andrews and Harry Belafonte

Please note: This blog has been edited down toward the release of a new book on The Julie Andrews Hour.

The day of my return to The Julie Andrews Hour had arrived at last! I took my classes in the morning and, then, hopped on a bus to the ABC Studios on .

I had the letter I'd received from Julie's secretary in my purse (just in case)but seeing that the guard was busy, I walked through the gate and up the slight incline to the studio. As predicted, the “Do Not Enter” sign was sitting on a stand in front of the door. I opened the door and walked in.

It was dark inside, except for the stage. The seats in the back had a low light over them, but sitting there might look as if I had snuck in and didn’t belong. There were a few people sitting down front, so I made my way quietly down the aisle and sat in the center, a few rows back from the stage.

Julie was onstage in her dressing gown. She was rehearsing with Harry Belafonte. Of course, I recognized him right away. My mother often spoke of him. Beginning in the 1950s, Belafonte made a name for himself singing folk songs, particularly those with a calypso beat. Recordings like “All Day, All Night, Mary Ann” and “Matilda” had made him a household name. Unbeknownst to me, three years earlier, Julie and Harry had appeared together on a television special titled, “An Evening with Julie Andrews and Harry Belafonte.” In essence, they were old friends. 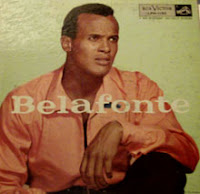 As I sat down, Julie and Harry were working on the opening for the show. They each had to open a make-believe door and rush out, but they couldn’t seem to do it fast enough for the director. Director Bill Davis, who we only heard through the PA system, told them to do it again. It seemed the scene was going to be shot in chromo-key, with a cartoon door (not sure about that), so Director Davis asked them to pantomime opening and closing the doors.

Watching these two great performers pantomiming their actions caught my attention. They were doing exactly what I had been studying in my acting class! ...

While Julie and Harry changed into their costumes, the stagehands laid out a design of foot lights on the stage floor, which gave the performers a path to dance on.

While the crew was setting up, I moved over to a seat against the apron of the stage. Somehow I felt more secure there, as if I could blend into the structure and not be noticed. It also put me opposite center stage. The apron extended from the stage out into the audience about twelve rows. It was the place where, most of the time, the camera on the boom was located ...

.... The section of the number, when everyone danced in and out of the scene needed a bit more work...  For a time, Harry practiced with Julie’s choreographer, Tony Charmoli, while Julie sat on the side in her chair and took off one of her shoes.

While Julie was in the back,  I decided I would say ‘how do you do’ to her when she came back down the aisle on her way to the stage. However, once she finished with the children and started walking down the aisle, the producer (I think it was Nick Vanoff) was walking with her. He was saying, “It was so gracious of you to talk to them,” so I didn’t try to say 'hello.'

The crew, including Julie, Harry and the Tony Charmoli dancers went back to work. At one point there was a long wait. After a while, I wondered where Julie had gone. I thought she was on the apron behind me, but it was so quiet, she couldn't have been back there all that time, I thought.

Curious as to where she was, I turned slightly. There, just about a foot behind me--at my eye level--were a pair of blue satin slingbacks with seeding on the top. For a moment, I wondered how difficult it would be to sew sequins and beads on a shoe as opposed to sewing them on a gown, the way I'd done recently at school. Then, suddenly, it occurred to me that those shoes must belong to Julie. ...slowly, I raised my eyes to the satin, turquoise gown and then ..., in a flash to a pair of eyes that matched the gown.... the very blue eyes of Julie Andrews! ...

Posted by Michelle Russell at 11:00 AM