Episode 10 - A Tribute to Walt Disney

On , the day before Thanksgiving, The Julie Andrews Hour was moved from 10:00pm to allow Julie’s young fans the opportunity to see her holiday special. The producers of the show had a grand treat planner for the viewers -- a tribute to Walt Disney and the songs from his films. Weaving the original Disney film clips into the live performances of Miss Andrews and her guests, the creative team created a timeless treasure. It is surprising that it has not been shown again during the holidays.
﻿﻿ ﻿﻿The show opens with Julie Andrews looking lovely in a pink chiffon evening gown. Guest stars Donald O’Connor, Alice Ghostley, and the Walt Disney characters, including Mickey Mouse, Donald Duck, Dumbo, The Three Little Pigs, the Wolf, Goofy and many more join her for the opening, "Zip-A-Dee-Doo-Dah"


As Julie explains, Mickey Mouse, who made his first appearance at the Colony Theater in  in 1938, turned 44 that year. Clips of Mickey’s early films are cleverly woven into the dialog and music here. This same method of weaving film clips into the action throughout the show, holds our attention and makes the show move along quickly. The quality of Walt Disney's films are such that no matter the age, they are a pleasure to watch.

This espisode of The Julie Andrews Hour includes a very talented group of performers known as The Young Americans, a choral group, founded by Milton C. Anderson in 1962. What made The Young Americans unique is that they were the first choir in the to combine choral singing with dancing and movement. Naturally, the young men and women (between the ages of sixteen and eighteen) were multi-talented. In their segment of the show, The Young Americans perform a great medley of songs from Walt Disney pictures, including “Second Star from the Right.”
Carol McCluer had recently joined The Young Americans when they received the offer to appear on The Julie Andrews Hour. Of course, she was thrilled to appear on the same stage as Julie Andrews. Looking back now she says, “I remember being so impressed with how professional she was.” 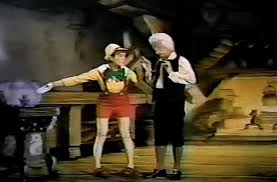 One of the most charming segments of the show is the scene in which Donald O’Connor (who reveals himself to be a fine character actor on this show) plays Geppetto, the toy maker who created the puppet, Pinocchio. Julie Andrews plays the wooden puppet who becomes a real boy. Her charming portrayal of Pinocchio is a testament to her acting ability. Julie captures the sweet simplicity of a child and even sings the sing "I've Got No Strings" in a child's voice, not the Julie Andrews voice that we are accustomed to.
The scene also boasts a real fluffy grey kitten and a goldfish. In some out-takes that recently surfaced on the internet, the kitten crawls down, and, in an effort to hide tries to crawl up Julie’s pant leg. Ever the disciplined performer, she attempts not to break character until the laughter in the studio is so loud, she can’t help but laugh too.
﻿ One of the truly special moments on this show is the guest appearance of Adriana Caselotti. In 1937, Adriana was hired by Walt Disney to be the voice of Snow White  in the first feature animated film, Snow White and the Seven Dwarfs. On the show, Casselotti (1916-1997) tells the story of how Walt Disney was looking for a particular kind of voice for his film. He asked her father, a voice teacher, if he had any students who might play the role. Finding no one who pleased him, Disney discovered in Adriana the perfect combination of vocal ability and childlike innocence.


During her appearance on the show, Adriana sings “I’m Wishing” and “Someday My Prince will Come" during which clips from the original film are shown. Vocally, it seems she has not changed in the last 34 years. When she and Julie Andrews join together in a duet of these songs, it is truly lovely.
Other special moments on the show include a comic sketch with Donald O’Connor as Donald Duck, and Alice Ghostley as Cinderella’s wicked step- sister, his wife. (Of course, Alice Ghostley was one of the step-sisters in the original musical television production of Cinderella, starring Julie Andrews.) Another special moment is the musical number, “He’s a Tramp” from the film Lady and the Tramp. In it, Julie takes a break from fairy tales. Dressed in a sophisticated gown with feather boa, she moves through the back alley singing. We soon discover, the object of her affection is “Goofy.”
During a good portion of the show, Julie Andrews wears a beautiful pink, chiffon gown. She has never looked lovelier, and seems completely at ease and filled with happiness. Toward the end of the hour, Julie and Donald O’Connor join together to recall some of the songs from Walt Disney’s films. When Donald mentions “Mary Poppins,” Julie looks at the camera and says “Who?” It’s a very funny moment. Then they proceed to have a wonderful time singing and dancing “Chim-Chim Cheree,” “A Spoon Full of Sugar,” “Jolly Holiday with Mary,” “Step In Time” (with clips from the film), and “Supercalifragilisticexpialidosis.” Julie also sings the lovely solo, “Feed the Birds.”
A friend who attended the taping told me that during Julie and Donald's dance numbers there was some difficulty. The beautiful “scarves,” designed to flow from Julie’s shoulders, were very long and touched the floor, and when hoofer O’Connor was dancing, he kept stepping on them. Apparently, because of this, they had to stop a lot during the taping. The problem seems to have been solved for the most part by having Julie Andrews hold the scarves, or grab them, and make them part of the dance, however, here and there--something you probably wouldn’t notice it unless you were looking for it--Donald steps on Julie’s dress. It’s just one of those problems performers run into and overcome to make “the show go on.” It’s a shame they had this problem because the gown is truly one of the loveliest Jack Bear designed for Julie.
As someone on the crew explained to me, in 1972, technology was far less advanced than it is now. Everything they did with the chromo key-- a kind of blue screen of the period-- was far more difficult and time intensive than it is now. Watching this show, however, you would never guess how difficult it was to produce. The result is flawless. The artistry of Walt Disney and the artistry of those working on The Julie Andrews Hour is seamless and enchanting.
Speaking of enchantment, one of the most wonderful segments on this show is the one in which Julie is put into the Fantasia film. Dressed in leotard, tights and a filmy sort of fairy or flower costume, Julie floats, twirls and drifts through scenes of flowers, leaves and snowflakes. Likely, it took hours of rehearsal, shooting and editing to create this lovely scene, but it is all well worth it. This scene is another treasure which has been too long forgotten with time.
﻿

At that conclusion of the show, Julie tells us that Walt Disney’s dream was to make every child in the world happy and to make their dreams come true. After all these years, it is amazing to realize the extent to which Walt Disney succeeded with his dream. It continues, even now.
﻿﻿To close the show, Julie is joined by Donald O’Connor, the Disney characters and The Young Americans, singing “When You Wish Upon a Star. "


As the credits role up, we see children of many ages coming up on stage. Of course, they are more impressed by Donald Duck and Mickey Mouse (one little girl kisses Mickey’s nose) than Julie Andrews. My friend, Vivian, would later tell me that after the show, a little boy and his little sister came up onstage to greet Julie. The little girl gave Julie a flower and the boy, her brother, took it away from Julie saying, “You can’t have that!” Of course, children know nothing about movie stars.
Happy Thanksgiving!

ALL Photos included in this blog are for entertainment purposes only.

Coming soon: Behind the scenes with Julie and The Smothers Brothers and Jack Cassidy

You can find a listing of the blogs and direct links at:
http://www.JulieAndrewsHour1972.com
Posted by Michelle Russell at 5:40 AM