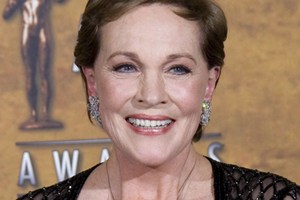 Seventy-seven years ago today, , a baby girl arrived in the maternity hospital at Walton-on-Thames. As Barbara and Ted Wells gazed upon their beautiful little girl, they would have been quite shocked to know just how far from their small village little Julia would travel one day, and how many millions of people she would touch.

As I began this blog on The Julie Andrews Hour, it seemed to me that Julie Andrews’ career was so well-known; it would be redundant to write about it. However, I realize that while many people know her for some of her roles, not everyone knows about her early years.  In any case, there could be no more perfect time to write about Ms. Andrews' career than the occasion of her birthday.

Julia Wells, as she was officially named by her parents, spent her early years as a fairly normal child. She had a brother, Johnny, two years younger than her, and they spent their time playing and doing the things that children do. In addition, little Julie attended dance classes, conducted by her Aunt Joan.

There were things in Julie’s young life were not ordinary or easy for a child to deal with. During her childhood, she experienced the hardships and fears of wartime. In addition, her mother, who was a pianist, often left home to play for the soldiers. She was five, when she learned that her mother had deserted her father to live with a singer named Ted Andrews.

When Julie was seven, Ted Andrews began to give her singing lessons. Around this same time, a doctor discovered that she had a larynx that was almost completely developed. At the age of nine and a half she began studying voice with a well-known opera singer, Madam Lilian Stiles-Allen.

The war ended in 1945. Shortly after that Julie turned ten. By now her singing had developed, and she joined her mother and step-father onstage for the first time as “Julie Andrews.”

During The Julie Andrews Hour series, I remember being somewhat baffled to hear Julie speak of herself as a child singer in terms that seemed rather demeaning to me. It was during the show that I first learned of her rare ability as a child and of her many performances, both onstage and on the radio. One of her performances at that time was part of the Command Performance for King George V and his family, the eldest child being Princess Elizabeth, the present Queen of England. Seeing a photo of young Julie, I thought she was a beautiful and adorable child. I knew that her ability as a child was quite remarkable.

As Julie Andrews grew from child to teenager, she expanded her work, appearing in pantomimes and playing roles. At the age of eighteen, she was chosen to play the lead, Polly Benedict, in The Boyfriend, a musical which had played and was slated to open in the on Broadway. In her wonderful biography, Home, Ms. Andrews writes of how she balked on the idea of going to . There were problems at home and she felt she didn’t want to be away that long, but as fate would have it, she did go and her life was forever changed.

Following her success in The Boy Friend, Julie was cast in the new musical by Alan Jay Lerner and Frederick Lowe, My Fair Lady, opposite stage veteran Rex Harrison. Julie did not have an easy time. Not only was the role of Eliza Doolittle demanding, but the energy and ability to bring a character across the footlights, especially on Broadway, was a huge task. Thanks to the show’s director, Moss Hart, and his work with Julie over a 48 hour period, a brilliant new musical actress was born. With the opening of My Fair Lady, Julie Andrews became a true star. People could not get enough of her. During the next few years, she appeared on television numerous times and recorded many fine albums.

My Fair Lady was followed by another Lerner and Lowe show, Camelot, which starred Richard Burton as King Arthur and newcomer Robert Goulet as Sir Lancelot. Following this Broadway show, Julie Andrews entered the world of film, beginning with Mary Poppins, followed by The Americanization of Emily and, then, The Sound of Music. Her life and the film world would never be the same.

As a singer and performer, Julie Andrews was able to do what few had. Julie was a singer with a classical background and a five octave range, but her tone and manner in singing never pigeon-holed her as a classical singer alone. During those early days, her voice was considered to be one of the most remarkable in the business. It dazzled and people could not get enough. But along with Julie’s dazzling range and pure tones, there was another aspect to her singing. Listen to “How Are Things in Glocca Mora?” or “I’m Old Fashioned.” Her voice moves beautifully with the music and, in some songs, (as with the two above), her phrasing and intonation is quite unique. It is absolutely fresh. Even today, no one has recorded anything quite like it, or in this writer’s humble opinion, quite as lovely.

In 1972, entering her third month of work on The Julie Andrews Hour, Julie, celebrated her thirty-seventh birthday. Although she looked and seemed so young then, she was well-aware of the passage of time. When she took on the show, she told her husband, Blake Edwards, that she should “do it now” while she was still able.

In the years between her first film, Mary Poppins, and The Julie Andrews Hour, Julie’s life had gone through many changes. She had married her childhood sweetheart, Tony Walton, given birth to a beautiful little girl, Emma Kate, and then had gone through a divorce. The divorce seemed quite shocking at the time, even scandalous for this young, beautiful and seemingly perfect star.

In the years following The Sound of Music, Julie Andrews made a number of musical films. With each film, the producer of that film had great hopes the work would match the success of The Sound of Music. None did.

Following two dramas: Torn Curtain and in 1966, Julie filmed Thoroughly Modern Millie” the following year. The theme song for that film was a huge success, and played repeatedly on popular radio stations. The film, itself, was the biggest success Universal Pictures had had to that point.

Julie’s next film, “Star!” about the life of Gertrude Lawrence was filled with music and grand costumes. Its theme song was also a huge hit, and played repeatedly on the radio and at nearly every big awards show. The film, however, was not popular. Julie had attempted to expand her work in playing Gertrude Lawrence, but even though films were changing to be “reality” oriented, it appears that people didn’t want to see her troubled, angry or anyway but happy.

In 1969, Julie went to work on a new film, Darling Lili, which was directed by the man who would soon become her husband, Blake Edwards. The score was by Henry Mancini. Everyone involved was sure that this film had the markings of greatness and would be a success. In fact, at this time there are those who consider Darling Lili one of Edwards’ best films, but at the time critics and audiences were not enthusiastic.

After all these films--which I’m sure had many viewers—reviews and box office receipts –all compared to The Sound of Music, left reviewers and studios referring to the new films as “flops.”

After this, Julie took a three year break. She had not planned on a break of that length, but meanwhile she was busy. She had a new husband and two new children: Blake’s daughter, Jenny, and his son, Geoffrey, as well as her own daughter, Emma, to care for. Whatever she felt about her career, she was happy being a mother and wife.

There was one more aspect of Julie Andrews that came into play during this time period; she wrote her first children’s book, “Mandy.” In the documentary, Julie, Blake Edwards thoughtfully asks his wife about the new book she is working on, asking how working on a television show will affect her ability to continue with her writing. Clearly, he is aware that her writing means a great deal to her. As of this date, Julie has written approximately 41 books - both with her daughter, Emma Walton Hamilton and by herself.

Since The Julie Andrews Hour, Julie has appeared in many, many films, on television, on Broadway and off, as well as in concerts around the world. Her catalog of work is truly amazing.

Here’s to Julie - wishing her a very happy birthday and many more years, doing the work she loves. She has added a great deal to all our lives.

If you would like to see The Julie Andrews Hour released on DVD, along with possible music CDs, including a duets CD with Julie Andrews and her guests, please send a respectful e-mail to requesting this to:  dan.gopal@itv.com