Dressed as Carol Burnett’s char lady, carrying a mop and pail, Julie Andrews walks onstage, begins to mop the floor, and then seats herself on the bucket. So begins the third episode of The Julie Andrews Hour. This entrance, of course, was a nod to Julie’s good friend, Carol Burnett.

The opening scene changes as eight male dancers arrive, telling Julie that what she’s doing has “been done.” “That’s Been Done” is an intricate musical sketch of interwoven clips showing Julie, her dancers, historic clips, and comedy bits by Rich Little, who plays everyone from Jack Benny, Johnny Cash and Johnny Carson to Walter Brennan.

The guest stars for Episode Three are actor/song and dance man Ken Berry and Broadway musical actor, Jack Cassidy, who it is said was nominated for as many Tony Awards as anyone in history. The show is a fun and beautiful tribute to the musicals of the 1930s. Watching the show once again today brought a smile to my face. It seems even more wonderful now than it did in 1972.

“It was a beautiful, elegant show,” Ken Berry said recently when speaking of The Julie Andrews Hour. “Julie was a sweetheart to work with.”

was invited to be on the show, partly because of his association with Julie’s good friend, Carol Burnett, whose show he appeared on frequently.

During the first half of the show, Julie and Ken pay tribute to the Fred Astaire-Ginger Rogers films of the 1930s with a compendium sketch of their films. As Ken Berry says on the show, “Fred meets Ginger, Fred goes away, Fred comes back, Fred looses Ginger, Fred gets Ginger back, and Fred and Ginger get married and dance happily every after.”

Once Julie and Ken step onto the set of their 1930s story, it’s beautiful music, wonderful dancing, gorgeous costumes and fun, fun, fun! As Ken Berry walks across the floor with that Fred Astaire saunter that no one else has duplicated, we are taken by his ability and charm. He and Julie dance beautifully together. The sketch is pure joy. When I commented to Mr. recently on what a wonderful song and dance man he was, he told me some interesting stories about his life. 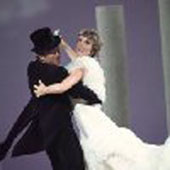 Born on in , knew by the time he was twelve years old that he wanted to be a dancer. Those years of his youth were the time of the movie musical. He spent a lot of time watching Fred Astaire and Gene Kelly on the big screen.

After won a local talent contest at the age of fifteen, big band leader Horace Heidt, who had sponsored the contest, asked him to join his traveling ensemble, The Horace Heidt Youth Opportunity Program. For fifteen months, traveled with the group, singing and dancing on the post-WWII Air force Bases in and for the general public across the

After high school, Ken Berry joined the Army. But a short time after he joined, his sergeant announced a talent contest. Ken won the contest and as a result was sent to to appear on Arlene Francis’ television show, Soldier Parade. Returning to the Service, , who was under the supervision of Lt. Leonard Nimoy, spent a good deal of his time touring army bases and entertaining the troops. Just before he left the Army, he appeared on The Ed Sullivan, ultimately, winning a studio contract with Universal Studios. Like many things in life, however, the turn of events in Ken Berry’s life did not work out exactly as he had planned.

From the very beginning, Mr. Berry told me, he had never doubted that one day he would be working at a major movie studio making musicals. In 1956, he was working at the Sahara Hotel in with Abbott and Costello, opening the show with song and dance sketches. One day he stood  looking into a mirror in his hotel room, wondering what had happened. For years he had been compared to Gene Kelly and Fred Astaire. He should have had a contract by now. Then, it hit him. “I realized that my dream to be in motion picture musicals wasn’t going to happen. They would be gone. That thought had just never occurred to me before...” That was a tough moment for him, and he realized he would have to make other plans.

Although would eventually become best known for his work on F-Troop and Mayberry RFD, over the years, whenever he could, he continued to work as a dancer, which he did in The Ken Murray Blackouts show in , and The Billy Barnes Review. It was while working in the latter that Carol Burnett first saw him. She convinced the producers of The Gary Moore Show, where she was working, to bring Ken Berry onto her show as a guest.

Carol Burnett would always be a great supporter of Ken Berry. While The Carol Burnett Show (1967-1976) was on the air, Ken was one of her most frequent guests, appearing on the show at least once a year. Although television didn’t pay much during the early years, Ken was grateful that at least he was able to make a living with it.

While Ken Berry was the all American guy, “a gentleman,” as choreographer Tony Charmoli says of him, Jack Cassidy was full of “pranks.” “He had no fear” said , in describing how Cassidy went straight ahead with his performance on the show. “Julie liked him.”

In the second half of the show, Jack Cassidy appears as a very flamboyant Florenz Ziegfeld, the legendary showman of the “,” before Broadway was Broadway. Julie plays an aspiring performer, and Alice Ghostly appears as the tragic, yet comic widow of a magician. Rich Little also appears as a young George Burns (as well as Jack Benny), trying to get hired by Ziegfeld.

In the sketch, it’s quite obvious (at least to me) that Cassidy is making up some of his lines, or rather, going over the top, and Julie is having a time, trying to keep from laughing. Cassidy’s over the top approach and Julie’s laughter makes the show all that much more fun.

Jack Cassidy was born in on . He had a very successful career on Broadway, winning Best Featured Actor for the musical, She Loves Me in 1964. His catalog of work on television and film is tremendous.

Jack Cassidy married Shirley Jones in 1956. In 1972, Shirley and Jack’s son by his first wife, David Cassidy, were working together on the very popular television series, The Partridge Family. Jack and Shirley had three sons together.

Julie Andrews’ musical numbers with Jack Cassidy are classic. Cassidy, with his Broadway energy, style, and over the top characterization make for a great show.

During the taping of this show, the cast and crew of The Julie Andrews Hour were working long hours (as director Bill Davis mentioned in my blog two weeks ago). On Friday night, when the show was taped, Ken Berry recalls being hard at work in the studio at two or three the morning. Everyone was exhausted, ready to drop, and looked it, but “Julie looked as fresh as she had when she started that morning,” Ken Berry told me. He wondered how she did it.

Meanwhile, Ken wasn’t feeling all that well. He’d caught a bug or something and was wondering how he was going to get through the next hours of taping. While he and Julie were talking, he mentioned this to her.
“Have you ever taken chewable protein?” she asked.
He had not. Julie excused herself and went back to her dressing room, which was quite a ways away and came back with some pills, which she gave to him. He chewed them and “they worked like a miracle.” As a result, he was able to complete the shoot without a problem. Later, he was able to get some of these pills on his own and says they improved his health greatly. was very moved by Julie’s thoughtfulness and kindness to him.

Working with Julie was a great experience, he said. “She was so beautiful. I will never forget working with her.”


At the conclusion of the show, Julie, Ken and Jack sing a medley of old songs tied together by the more modern, “Just an Old Fashioned Love Song.” It is a medley that has many elements and styles; it swings, harmonizes, and is sentimental. The three performers really throw themselves into it. It's a wonderful performance to watch and to listen to. This medley would make a great addition to an album of Julie Andrews Hour songs.

There are many elements to this show I have not mentioned here, including three beautiful solos by Julie (I adore Tulip Time where Julie is dressed as a Dutch girl and she and the chorus dance in wooden shoes). There is also a great sketch with Alice Ghostly playing a housewife in curlers, who fantasizes about Humphrey Bogart, (played by Rich Little) as her ideal man.

Jack Cassidy would appear on two more Julie Andrews Hour shows. Ken Berry was invited back, but at the time they wanted him, he was not available. “I had a contract and I just couldn’t get out of it,” he said regretfully.

Many thanks to Ken Berry for sharing his personal memories of The Julie Andrews Hour. I hope I have done justice to his stories.

ALL PHOTOS HERE FOR ENTERTAINMENT PURPOSES ONLY.