Julie Andrews’ guest for the 21st Episode of The Julie Andrews Hour was one of the top entertainers in the world at that time, Sammy Davis Jr. Although the average person was probably a surprise at the choice—Julie and Sammy seemed to be opposites in every way—this show, which aired on March 3rd, 1973, is a great one. 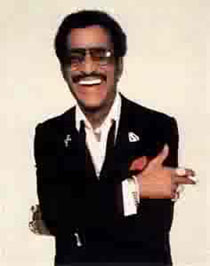 Sammy Davis Jr. was born on in to an African-American father and Cuban mother. Sammy came from a real show-business home. His father was an entertainer and his mother a tap dancer. By the age of three, little Sammy was appearing on the vaudeville stage as part of a trio with is father, Sammy Sr, and Will Mastin. They would be known as the Will Mastin Trio.

After his time in the service, Sammy returned to the Will Mastin Trio, and in 1951, during his performance at Ciros after the Academy Awards, Sammy Davis Jr became a sensation. As another guest on Julie Andrews’ Hour, Ken Berry, said of Sammy at that time, ‘he could do everything; sing, dance, tell jokes, impressions.’ So, it didn’t take long for Sammy Davis Jr. to become a solo act.

Sammy Davis Jr. was one of the first entertainers of his race to cross the color barrier and be loved and accepted just for his talent. This, however, did not occur with out a great deal of trouble. At the time he began appearing in , black performers were not allowed in the casinos, or allowed to stay in the hotels. They had to stay off the strip and wait out by the pool until it was time for them to go onstage. When Sammy fell in love with white actress, Kim Novak, he was threatened with his life. Eventually he married a Swedish actress, Me Britt and had three children with her.

Sammy was in a horrific accident during this time and lost an eye, which was later replaced by a glass eye. However, none of these things kept him down. Befriended by Frank Sinatra, Sammy became a member of the famed Rat Pack. In 1972, the year before his appearance on The Julie Andrews Hour, Sammy had a huge unexpected hit with the release of “The Candy Man,” a song he didn’t particularly care for. During this time, he also adopted a very “hip” look, wearing loads of jewelry and mod clothes. He was considered “cool” to the young and still enjoyed by those who liked the classic song. Sammy could do it all.

After appearing onstage in a glittering gold and bronze gown, singing “It’s a Musical World”--a song that is a bit more modern than usual-- Julie introduces Sammy Davis Jr. It is interesting to note that while, even with his platform shoes, Sammy is a good deal shorter than Julie; his energy fills the stage, almost banishing the difference in size.

At this point, we learn the reason for Sammy’s presence on the show. He and Julie are old friends, having become acquainted when they were neighbors on Broadway; she in Camelot and he in Golden Boy. During this time they became well acquainted and even went out to dinner together.

Julie is clearly thrilled to have Sammy on the show. She tells him he can do anything he wants and with that, they are off and running, heading immediately to one of Julie’s great Broadway hits, My Fair Lady, where Sammy immediately jumps into the role of Henry Higgins, or rather, Rex Harrison as Henry Higgins. His impersonation is spot on and extremely entertaining. He sings, “Why Can’t a Woman Be More Like a Man” with Rich Little in the role of Colonel Pickering.

As soon as Sammy finishes his number, Julie bursts through the door as the furious and indignant Eliza Doolittle, singing, “Just You Wait Henry Higgins.” It is a powerful performance and gives us the chance to see a portion of Julie’s historic performance with all its nuances. Thank goodness this is preserved! Julie is brilliant, and at the end, so furious, she takes a glass and shatters it on the desk. Then she looks around for something else to smash, even opening the desk drawer and looking inside, which is a rather funny moment.

From My Fair Lady we travel to Guys and Dolls with Sammy Davis playing Nathan Detroit wonderfully and Julie, in a blonde wig, as . In a humorous bit, Julie, as , complains about boyfriend Nathan’s gambling, while she slips some of his winnings down the front of her dress. Julie and Sammy are great working together on “Sue Me.”

Next, we are off to where Sammy plays Teyve in Fiddler on the Roof. It is interesting to note that some years earlier, after a long conversation with entertainer Eddie Cantor, Sammy Davis decided to convert to Judaism. As a black man, his conversion caused quite a commotion and it is said, made him even more famous than he already was. ’ performance of “If I Were a Rich Man” is wonderful; he seems to revel in the role. It is interesting to note that with Sammy on the show, the company added several African American chorus girls to the cast.

At the ending of “If I Were a Rich Man,” we hear a strain of music from Finian’s Rainbow. Sammy sings, “I hear a bird, a bird,” and then quips, “In Russia?”

The camera then reveals Julie, dressed as an Irish lass, singing “How Are Things in Glocca Morra.” This song was one of the loveliest cuts on an early Julie Andrews album, and it is a rare treat to see her sing it.

Following ‘Glocca Morra,’ is another song from Finian’s Rainbow, “When I’m Not with the Girl I Love, I Love the Girl I’m Near.” For this number, Sammy Davis, dressed as a leprechaun, cavorts around the stage with various lovely girls. It’s great fun, and the director closes the scene by freezing a shot of Sammy mid-air, clicking his heels just like a leprechaun. A treasure.

In the next scene, we see Sammy and Julie dressed in white suits for a scene a scene from The Music Man, “Trouble Right Here in .” A large group of people join in on this number, including dancers, singers and extras.

After a commercial break, Julie suggests that Sammy, who is a wonderful impersonator, join forces with impersonator Rich Little for some fun. The idea is for them to sing together as various stars. When asked who she is going to be, Julie replies, “Why Julie Andrews, of course!”

Sammy starts off as Frank Sinatra and Rich does Anthony Newley. After that, both Sammy and Rich sing as Dean Martin, until Sammy suddenly becomes Jerry Lewis. Then, it’s Bing Crosby for Sammy and Perry Como for Rich.

When Julie asks Sammy to sing as Nat King Cole, we are thrilled as she to see how he channels Cole with “Sweet Lorraine.” Then, Rich plays Liberace.  During this entire performance, it’s as if we, the audience, have been invited to a wonderful party. With Sammy, there is a feeling that the audience is as much a part of the performance as the performer. We have a sense that we are his dear friends and he wants to make us happy, which he does.

At one point, Julie asks Sammy to play someone. It’s difficult to hear the name she mentions, but at that point, Sammy takes off singing and kicking his legs in a dance that makes Julie and Rich laugh for joy. It is clear that these two performers are overjoyed to be working with this great performer.

Sandy Vanoff, sister of producer Nick Vanoff, told me that of all the guests she met during the time she worked on The Julie Andrews Hour, Sammy Davis Jr. was the nicest.  The joy in this scene is infectious. During the rest of this segment, Rich and Sammy play Johnny Cash, Frankie Laine, Elvis Presley, Tony Bennett and Robert Goulet.  In the end, Julie ambles to the front of the stage and speaks (obviously using a voice over). She’s impersonating John Wayne and the expression on her two co-stars’ faces is priceless.

After another commercial break, Julie Andrews and Sammy Davis Jr. return, dressed in tuxedos. They sing and dance an old soft shoe. Eventually, they decide to tap. This gives Sammy a chance to show what a great tap dancer he is. When they take turns, Sammy dances up a storm and, humorously, Julie responds each time with one tap or one stamp.

The next number is “A Couple of Swells” a wonderful routine originated in Easter Parade by Fred Astaire and Judy Garland. Julie and Sammy perform it wonderfully, and in the end, having been pushed so many times by Julie-- who is really into her performance—Sammy stands on the side to get out of her way, and Julie completes the number by herself.  Of course, this is all in good fun, and Julie, who is keeps singing and dancing, barely able to hold back her laughter, is finally pushed off stage by Sammy.

The pair also performs another Judy Garland number, “Be a Clown” which Judy first performed in the film, The Pirate, with Gene Kelly. It is obvious there was a lot of cutting up off camera and by the end of the song, the two performers are rolling on the floor, laughing so hard, they can’t even sing. 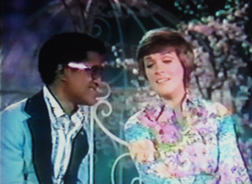 The comedy numbers are concluded by a quiet duet, which Sammy suggests. The duet is a medley of wonderful songs about spring and the scene is shot through branches of cherry blossoms and beautiful little birds.

Throughout the show it has been obvious how much Julie looks up to Sammy and is thrilled to be performing with him. Then, for a moment, as Julie sings a lovely solo line, we see Sammy Davis turn, clearly enthralled by the beauty of her voice. It’s a lovely moment and a lovely duet.

The final musical number of this episode takes place on the stage with the band. Julie and Sammy have changed to seventies garb, bell bottom pants and vests with long fringe. Julie wants to “get down” with Sammy and he is going to show her how.

Sammy is clearly into rock and roll and jumps into the jive with a Blood, Sweat and Tears medley as easily as he performs his Broadway numbers and impersonations. Julie jumps in and, under Sammy’s tutelage, is having a great time, just “letting it all hang out,” but while Julie can do anything, rock and roll is just not her thing—not where she shines.

At the end of their number, as staged, Julie appears in a daze, as if she has dreamed it all. Sammy calls her name, and giving her a kiss, says goodbye, adding, “Peace, Love and Togetherness.” Then, as Julie turns to the camera and sings the final bars of “Time Is My Friend,” we see the Julie we know. Even after all the rock and roll, her voice is clear and beautiful.
The 21st Episode of The Julie Andrews Hour with Sammy Davis Jr. is a great show; it’s the kind of show that makes you feel warm and happy. It reminds us of what truly great entertainment is.

***
If you think The Julie Andrews Hour should be released for the public on DVD, along with music releases of Julie and her guests, please e-mail a polite request: dan.gopal@itv.com

If you prefer, you may look up ITV in or , and send a letter there.

All Photos are for entertainment purposes only

To see a complete list of Julie Andrews Hour blogs with links back to this site.
Please visit :   http://www.JulieAndrewsHour1972.com
Posted by Michelle Russell at 10:26 PM