October 13th - My First Visit to The Julie Andrews Hour

changed my mind about Fridays on the 13th being bad luck; it was one of the luckiest days of my life. Until now, I have been writing about The Julie Andrews Hour from the point of view of an outsider. Forty years ago, however, I was not watching Julie on television; I was watching her  at work in-person. This would be the beginning of many changes in my life.
Only one month earlier, I had left home for the first time. I was living in a dormitory on Sunset Boulevard and attending ’s Theatre Arts program.... Sometimes I found the classes at LACC too technical. But hidden away in my bureau drawer was something that would bring me one step closer to fulfilling my dreams. I had a ticket to The Julie Andrews Hour!

***
After my classes that morning, I returned to my room and got dressed in my nicest clothes.  I was so nervous all day. Finally, at , I went out and caught the bus on Sunset for ABC Studio.

The Julie Andrews Hour was taped at ABC's Prospect Studios in . I lived on Sunset about three blocks west of . On , there is (even now) a small strip-mall which runs up to the next street, . Just across from the strip mall, peeking out onto is a little street called . The bus I caught took me almost all the way to the studio. 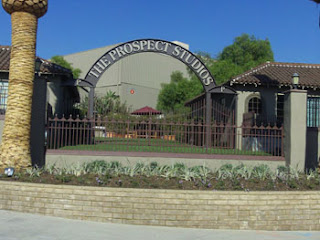 The Prospect Studio has a long and interesting history. It opened in 1915 as The Vitagraph Studio, a silent picture studio where many famous films were made. There were two daylight studios and many film sets. The studio was sold to Warner Brothers in 1925 and continuing on through the 1930s and 40s; Warner Brothers used it as a back lot to shoot scenes in large water tanks and on ships. In 1948, the American Broadcasting Company (ABC) bought the lot and held it until 1996 when ABC became part of The Walt Disney Company. During the late 1960s and early 1970s, the stages there hosted a number well-known performers and shows, including Tom Jones, Let’s Make a Deal and the KABC Channel 7 News. In 2002, many changes were made to the lot, including the addition of two large buildings.

The ABC Studio on Prospect lies in the Silver Lake District of Los Angeles, a residential area. In 1972, that area seemed a bit uncertain to me as to whether it was a good or not good neighborhood.

﻿
My heart pounded as I enter the studio gate for the first time. Passing by the security guard, I was directed to a large group of people who already waiting in line to get into the studio where The Julie Andrews Hour was being taped. It was a little before five when I arrived and the afternoon sun was very warm.

After what seemed a long wait—a half-an-hour or more-- we were directed to a large patio area, surrounded on two sides by walls and laid with red tiles. There were flowers growing around the edges of the walls, and white stone benches to sit on.  Once again, it seemed we waited a long time here. Meanwhile, we saw a lot of activity going on. There were men coming in and out of a door marked “Do Not Enter.” At one point, costumes were being brought in for the show, which was very exciting. Then, the director or producer came out and apologized, saying it would be a little while longer before the show began, but they had extra rehearsing to do.

A short time later, some people came out and began setting up tables with food and large canisters for tea. I laughed to myself, thinking, “Oh, we’re going to have a party.” A few minutes later, one of the pages announced that the drinks and food were for us, saying, “Compliments of Miss Andrews!” Boy was I surprised.

Finally, when it was getting dark, the pages came out and asked us to get in line....


After everyone was seated, the announcer Dick Tufeld came out to welcome us and speak to us about the show. Then he turned the mic over to Rich Little. After telling some jokes, he in turn turned the mic over to Band Leader Nelson Riddle, who, I might also add, was the Musical Director for The Judy Garland Show and has worked with some of the greatest singers in the business. Riddle talked to the audience for a while, then, Rich introduced the guest stars for the show: Cass Elliot of The Mamas and Papas and musical film actor Dan Dailey.

﻿
***
Dan Dailey was really old . Born in on , Dailey would have been fifty-six at the time of his appearance on The Julie Andrews Hour. He had begun his career in vaudeville and made a hit on Broadway in 1937 in the musical Babes in Arms. During the 1940s and  50s, Dan Daily was a huge hit in films starring opposite such stars as Eleanor Powell, Betty Grable and Ethel Merman. In 1948, he received an Academy Award nomination for Best Actor in the film When My Baby Smiles at Me.


.. I felt the air move above my head and then, there she was, Julie Andrews standing above me. "Hello," she said, looking at me. I could not speak....

I stayed until they finished at . It was then I realized I had been sitting there for eight hours, and it was heaven!\

This blog has been abbreviated due to re-writing for a new book on this subject.
Note:  All photos are for entertainment purposes only.

Posted by Michelle Russell at 9:44 PM