After writing the letter to Julie, and a long nap, I went back to Los Angeles City College. I was costume assistant backstage again, but I was restless. When I left the dressing room, I met the guy who has been following me. He told me, “You should smile. You’re pretty when you smile.” Then, he said, “I’ll help you with your acting anytime you want.” I may be innocent, but I’m not that innocent!

October 30th – Tonight was closing night for The Man Who Came to Dinner. I sat up on the counter and watched Janeen put her makeup on for the last time. It was a great show. The actors were relaxed and the audience (which we could hear over loudspeakers in the dressing room) laughed hard and in places they had not laughed before.

As the play ended, everyone was saying goodbye, and trying not to cry. Janeen is not only leaving the play, she’s finished with school, and already she’s going to be in a film. Tonight, I walked back to my dorm with tears streaming down my face. Once again I could not say all that was in my heart, which made the ending all the sadder. As I came to the corner at Sunset Boulevard, the wind nearly blew me away, but I didn’t care.

November 1st  – The show with Dan Daily aired tonight. During the scene with Julie and Dan playing old vaudevillians, I thought I saw the back of my head. I laughed thinking how television audiences would never know that scene was taped at . I thought some of the takes I saw in the studio were better were better than those on television but there are many reasons why one is chosen over another. That is the director’s choice. 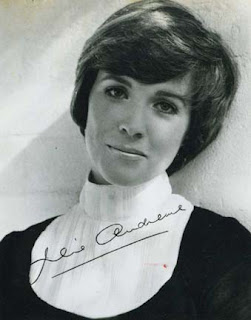 November 2 – Today I had a surprise in the mail.  If my roommate, Lynn, and I are in our room when the mail arrives, we see it come shooting under the door. That’s how they deliver it here. This afternoon, I got three things: a book from Mommy, a letter from and another letter from…. JULIE ANDREWS!

was there when the mail arrived, and I was shaking so hard I could barely open the envelope! The letter was from Julie’s secretary. She also sent me a 3” x 5” autographed photo. I wasn’t sure the autograph was real; it’s probably a photographed autograph-- but it’s nice anyway. In the letter, the secretary, Claire Priest, asked me to call her tonight.

I could barely wait until evening. Our only phone (the days before cell phones) is a pay phone in the hall. When I called Mrs. Priest, she told me she would help me get into the studio. She also informed me that the ‘Do Not Enter’ sign is always up, so not to be surprised if I see it.

At dinner tonight I spoke to the girl who used my tickets for the show last week. She told me Joel Grey and Robert Goulet were the guests, and that Julie rehearsed a dance for three whole hours!

November 3rd – I got a “D” on my pantomime class and some of my other grades were bad as well. It’s very upsetting to me that everything is graded on being technically correct. I want to work on creating roles
.
***

That night, I met my friend Alice and we spoke about everything. Even so, I was in a very bad mood for a few days after that. Semester finals were coming and I wasn’t feeling good about my classes. In costuming class, Mr. Ryan told us that we are going to have to work even harder than we did before. The next show the college is putting on will be “Guys and Dolls.”

Over the weekend, Mommy took me to see “Cabaret,” which came out a few months ago. The movie and the great performances cheered me up a lot.

November 7th - We learned that Richard Nixon had won the Presidential election.

Living in afforded me of all kinds of opportunities previously not available. Frequently, walking around town, I saw television shows and movies being filmed on the street. And there were movie premieres with klieg lights and loads of stars.

﻿
Early in November I learned that Grauman’s Chinese Theater was hosting the film premiere of Young Winston, a film about the early life of ’s great Prime Minister, Winston Churchill. The event would include a bevy of stars. I had never dreamed of going to a real premiere, but after finding out that I could attend for a mere $5, I went down and bought a ticket. The man in the box office said that Ali McGraw, Steve McQueen and Jane Fonda would all be coming in Rolls Royces. I’m hoping Liza Minnelli and her boyfriend, Desi Arnaz, Jr., will be there too.

Hollywood Boulevard. The klieg lights were crossing the sky and there was a huge crowd outside.

It was a job to push my way through the crowd. Unlike the crowd behind the barricades, I didn’t have to stand outside; I had a ticket! On the side, I found a way into the courtyard. A man and woman were standing there and said “hello” to me. Very quickly, I recognized them as stars of the TV soap opera, “The Days of Our Lives.”

Entering the courtyard, I got on line. Suddenly, I heard a very high voice calling, “Ros-a-lind! Oh, Ros-a-lind!” Just then, a woman in a long, black sequin gown walking by me. Yes, it was Rosalind Russell. I was surrounded by stars. There was Petulia Clark and a little blond, full of energy was running around, greeting everyone. That was Jane Fonda.
﻿


An older man with a sun-tanned face, perfectly fitted blue pin-stripe suit and a red carnation in his button hole was standing behind me, talking to Rosalind Russell. That was movie legend Edward G. Robinson. He’d been in movies since the 1930s with everyone, including Humphrey Bogart and James Cagney. Wow! And we all walked down the red carpet, into Grauman’s Chinese Theater together.

It was exciting going to a film premiere for the first time. I was thrilled to see famed director, George Cukor. This was old , the that had put stars in my eyes.

The evening gave me a chance not to think about tomorrow. I’d been disappointed so many times, I didn’t want to think about it. Bad luck. Yes, tomorrow I was going back to ABC Studios.

Coming Next: Closed Set with Julie and Harry Belafonte
Posted by Michelle Russell at 2:10 PM