Note:  This section is a continuation from blog 63

After two days of being sick in bed, I got up and went back to school. 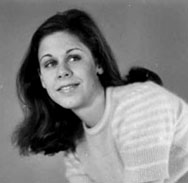 On February 6th, I signed up for my new semester of classes. At this point, I was only taking classes that interested me. Deep down, I think I had given up the idea that I was going to succeed at school.

For my theatre class, I sat up in the front row. Waiting for class to begin, my mind wandered to the golden-haired, blue-eyed boy I had a crush on –Chris; I wished he was there. Suddenly, he was there, sitting next to me! He wanted to know why I hadn’t passed my acting class. To me, Chris seemed like someone who would soon be a star, or someone who already was.

“Are you going to continue on?” he asked. “I think you ought to pass if anyone does.”

Then he said something that surprised me.
“When you get on stage, you have something special, and you’re the only one in class that has it.”

He did give me one criticism, telling me that in between my lines, I went back into myself. That was something I had to work on he told me.

“If they don’t pass you this next time, I’ll bomb the school.”

He made me laugh. Of course, in 1973, you could say something like that as a joke and no one would think you meant it. Now, it would be considered a ‘terroristic threat,’ but we were much more innocent then.

Chris and I talked for quite a while and I felt happy.  But later, when I saw him sitting with two girls and laughing, I felt jealous and left. Somehow his fun with the other girls seemed to discount the seriousness of what he had told me. Maybe he flattered every girl like that, I thought.

By Thursday, February 8th I knew there was going to be an audience the next day, Friday, for the taping of The Julie Andrews Hour, and I would be allowed to attend. I was so happy. Meanwhile, I had something else in my mind. I didn’t want to be seen as just a fan like Patty and Kelly-a fan who could be put out; I wanted to be seen as something more.

Often when they had an audience, before Julie came out and they began taping the show, Rich Little would entertain the audience. Sometimes he also asked if there was anyone audience who did impressions or something special, and he’d have them come up on stage to entertain. I wrote in my diary:

“I want to sing… I am determined to ask Rich Little if I can sing tomorrow at Julie’s, but I am so scared. I practiced, but I am sick with stage fright.

Tomorrow was coming and I had it all planned. I had even asked my best friend, , to critique me Friday afternoon before I went to the studio.

A list of blogs with links back to this site can be found at:

Posted by Michelle Russell at 7:25 PM