Suddenly, out came this huge blue animal named “Thog.” He was wearing a red and white striped shirt and looked so cute. This part of the taping was meant to be the show’s finale. Julie said, “Goodnight everybody” and then danced beautifully with the huge Thog, turning and curtsying to him. On the monitor, we could see the credits rolling over them, so we knew this was the ending.

During this part, it seemed as if Julie was making up what she said as she went along. She was only able to communicate with Thog through a transitor with the sound system. We later found out that the transistor was the thing thought to be causing so much trouble with the taping earlier.

During this time, Julie’s daughter, Emma Kate, was onstage. She came out wearing a scarf over her hair, the same way Julie wore hers in The Sound of Music. She was also wearing clogs. She loves to try to walk on her heels. While she waited on the side of the stage to see her mother, Emma did a little dance and then inspected the audience. That’s something she always does. At one point, she waved her fingers at someone. Then, she pulled up her knee socks and sat down, looking around, hoping her mother would see her. She sat in a chair that said “Steve” all evening. I don’t know what happened to the “Julie” chairs.

Julie was so excited about Thog. All of a sudden, she was there, bringing this ten-foot tall blue creature over to meet Emma.

When Julie and Thog got to the side of the stage, Julie motioned for Emma to come forward.

“And this is my other daughter, Jenny,” said Julie.

“Oh, she’s beautiful too!” he responded.  “It must run in the family.”

After that Thog had to go back to the main part of the stage. Emma was in a happy sort of mood, smiling as he left.

Around this time, Julie introduced her other guests on the show. They came out for the “Getting to Know You” segment and were seated in chairs. The guests were: Jim Hensen, creator of the Muppets, Sandy Duncan, who was one of the most popular people on television at the time, and classical singer, Sergio Franchi.

Sandy was wearing a beautiful green chiffon dress. The skirt was made of scarves, like a 1920s dress. Julie and Sandy hugged and kissed, as did Sergio Franchi and Julie. I could tell that Sandy felt very priviledged to be appearing on Julie’s show.

During the next scene, Julie, Sergio and Sandy did an adorable closing scene with Ralph, the Muppet dog, who I have always liked. They had to do several takes of this part. Finally, they got it right, but then Ralph made a mistake and in embarrassment, slunk behind the piano. The audience roared with laughter at that, and Julie laughed too. Then, she went over to talk to Ralph. It was so cute.

When Julie sang “Time Is My Friend,” Sandy Duncan stood on the side, dancing beautiful arabesque turns. Behind me, I heard the camera men talking. “She sure can’t sing,” said one.

“I know,” said the other, “but you should see her dance, she’s really a wonderful dancer.”

I was surprised to see how graceful and beautiful she was as she danced. 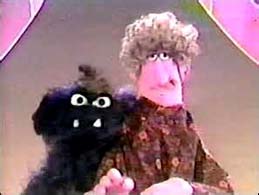 After they taped the closing of the show, they brought a puppet stage onto the stage and taped a great show about a lady with flowers and a bulldog. The bull dog was eating the lady’s flowers until she gave him an exploding cigar.

Emma Kate watched the puppet show and seemed to be fascinated. She is only a little higher than Julie’s waist and has long, blond hair. She doesn’t really look like Julie, but something about her is very Julie-like. It’s funny to see how she stands exactly like Julie and sits like her, side-ways in her chair, with one arm over the side. She had a great deal of poise for one so young. This was the first time I got to see her for any length of time. Usually, she is running harum-scarum all over the place.

I noticed that Sharri sat onstage next to Emma for most of the evening. She gave Emma a candy bar and, now and then, Emma would turn to say something to her.  The two chatted on and off, but most of the time, Emma was intent on watching the Muppets. One time, after the first take of the Muppet scene, Julie came over and took Emma behind the puppet stage.

Tonight was such a family night. There was a little girl sitting near me, who got up and ran around, trying to see the puppets better. Later, I heard one of the camera men saying something about wanting a picture for his kids.

After they shot the scene with Ralph one way, they turned the stage around (my diary note) so that Julie could do a scene about meeting the Muppet dog, Ralph, but they had to do a retake because Julie’s shadow fell on him. Cameras are so sensitive.
Ralph is a medium brown in-person, but on the monitor he looked so dark, he was almost black! Ralph told Julie he wanted to be her dog, and she told him, “But I already have a dog!” I wanted her to say, “Crystal Klutz,” but she didn’t.

Emma didn’t laugh during this time, though she may have when she turned to talk to Sharri. Still, she seemed delighted that the Muppets were there. It almost seemed as if they were just there for her. She watched seriously, intent on the happenings as if she knew exactly what went on behind the scenes, but was still interested. In a way, she seems grown-up, but I guess it is just she carries Julie’s manner.

During this time, there were many less people in the audience and it seemed to me that a couple of the girls moved down toward the front. I may have done this myself, but I don't remember. In any case, during this time Julie, Lorraine (her hairdresser) and Sharri (stand-in) came to the front of the stage and stood there looking out into the audience, as if they were searching for someone. They looked all over and pointed.

At that same time, the crew was erecting a big screen between the producer’s station and the seats for the “Getting to Know You” segment. The screen was blocking Emma’s view, so she got up. Then, seeing her mother, Loraine and Shari standing at the front of the stage, she joined them, and began looking into the audience too, as if she were trying to find someone. Seeing them so close, Kelly, who had obviously moved up closer, got out her camera and took a quick photo of Julie, Jenny, Emma and Sharri. I don’t know how it came out as I never got to see it, though I heard that it came out well.

All images used here for entertainment purposes only.

To see a list of Julie Andrews Hour blog subjects with links back to this blog, please visit:

Posted by Michelle Russell at 11:14 AM