This blog is simply about my life between shows... 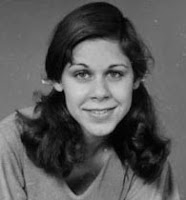 As 1973 began I was full of dreams and excitement for the new year. 1972 had been wonderful. Now, I was hoping for even greater things.
January 1st, after more than a week in West Covina with my family, my mother drove me back to my International House, my dorm in Hollywood. The next morning, I had dance class, piano and a prompt script to turn in. Then, my scene partner, Cydel, and I worked on our final, a scene from Stage Door. I was playing Terry and she, Jean. We rehearsed from early afternoon until around 7pm. It was exciting to realize I was finally doing the kind of work I’d spent hours over the last few months watching Julie Andrews do. The only problem for me was that I had been sick. “I don’t think I will be able to sing tomorrow,” I wrote.
On January 3rd, I went downtown to try to find the music store had told me about at the studio. Eventually, I called the offices of The Julie Andrews Hour and they told me to go to Hollywood Music. Because I was downtown so late, I missed dinner at International House, but I did find some sheet music I had been looking for. About the store I wrote, “It is an old, small music shop, but they have different things there. They also have stars’ pictures on the wall.”

Two days later, Cydel and I performed our scene. Cydel was so nervous she was shaking, but it went alright. For once our teacher, Mr. Butler, said nothing about my not being alive enough. He only said our blocking was no good. Even though I knew I had a lot of work to do, I felt everything I had witnessed on stage at The Julie Andrews Hour had helped me loosen up and do better in class. 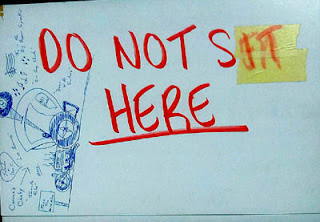 After class, I went back to my dorm and decorated the walls on my side of the room with pictures of Julie and Liza. I also tacked up my cue cards from Julie’s last show. One of them said, “Don’t Sit Here.” I put that all the way up at the top of the wall, next to the ceiling. I though it was funny to have a sign saying “Don’t Sit Here” next to the ceiling. Likely, that cue card had originally been on Julie’s chair, or perhaps the director’s chair. I don’t know what my roommate, Lynn, thought, but my side of the room had quite a display.

During this time, I started to develop a crush on a young classmate named Chris. I wrote in my diary, “He has the bluest eyes I have ever seen.” One day I was walking down the street with my arms full of books and groceries when he stopped and said, “I’ll carry your books for you. Really I will!”  Of course, he was flirting with a lot of the girls and my years of my shyness did not put me in a good position, either for meeting a cute guy or doing well on stage. This same day I found out that I was being left behind in acting class. I went back to my room and had a long cry. It seemed as if I would never belong; I would always be left behind.

After a weekend at home, with my mother’s mother-in-law complimenting my singing, I returned to Hollywood for another week of school.

***
Monday, January 8th, I decided to walk home after school. As I got close to my building, I became aware that someone was following me. He came up and acted as if he would pass me. Then, out of the corner of my eye, I saw that he was holding something in his hand—it looked like a gun! I was so frightened! I had almost reached the front walk to International House when, suddenly, someone came between us and I got away. (Looking back now, I can only think it was an angel who came so suddenly, out of no where. I did not look back.)
On Wednesday, January 10th, I went downtown to see Alice, my best friend from high school. After our visit, I went over Hollywood Music and bought some more sheet music. Wonder of wonders, they had four copies of the original A Star Is Born sheet music book. It was only a dollar, so thrilled, I bought a copy. The man there was so nice, just as Elizabeth had told me.

While I was walking back to Sunset to catch the bus, I passed RCA. I thought I saw Tony Charmoli, the choreographer. I couldn’t help wondering if Julie was rehearsing nearby. As I was getting on the bus, I saw the English actress, Elizabeth, walking sadly down the street in her long, black cape.

That night, I had my third singing lesson with Eugene Loring. From his small cottage in the Hollywood hills I could see all of the lights of Hollywood twinkling below.

Mr. Loring made me sing all the way up the scale as far as I could go. He also gave me lots of exercises to do. I must have told him about seeing Julie Andrews and loving My Fair Lady because after that he taped “Wouldn’t It Be Loverly” for me. He told me that the goal in singing is to bring a picture to the listener who cannot see what you are singing about and to bring feelings as well (my notes are not too clear). About the lesson, I wrote, “I didn’t sound too bad except I didn’t come out on the high notes. Mr. Loring told me, “You can’t sing like Julie Andrews over night.” I almost broke out laughing because I didn’t think I could ever sing like Julie Andrews period!

Returning to my dorm, I was able to watch the last half of the show with Keith Michell. We all watched television on a little black and white TV in a sort of den/kitchen. I commented in my diary,

“Julie’s show with Keith Michell was on tonight. I screamed with laughter when they said the lines on my cue cards. I loved “On a Clear Day” as much as ever.
Thursday, January 11
At school I had to stand on line for five hours to register for the new semester of classes. I got everything I wanted but dance. Then, I rehearsed with my scene partner. Our acting seemed very silly to me this night, and as the evening went on, it seemed to get worse, instead of better! Back at International House, I worked on a speech from The Mad Woman of Chaillot –practiced it all night.

Coming Next: Back at the Studio

A list of The Julie Andrews Hour blogs with links to this page can always be found on:    http://www.JulieAndrewsHour1972.com

Note: All photos here are for entertainment purposes only.

If you think The Julie Andrews Hour should be released for the public on DVD, along with music releases of Julie and her guests, please e-mail a polite request: dan.gopal@itv.com
If you prefer, you may look up ITV in or , and send a letter there.
Posted by Michelle Russell at 8:19 PM