…continued from the previous blogs…
NOTE: This blog has been abbreviated toward the release of a new book on this television show.

A little while later, Julie came walking onstage leading a little old woman in an Austrian costume. By now, we all knew that Maria von Trapp –the real Maria whom Julie had played in The Sound of Music, was going to be there. I think we were all a little awe struck. I know I was. 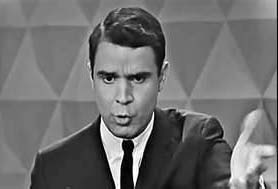 ... Rich Little took over and gave us his impression of Jack Parr. It was very funny. (I believe this segment was taped as part of the show)
Coming out to say goodbye to the audience (I believe he was going to or to do a show that weekend), he performed his whole act for the audience. He even smoked cigars and cracked a few dirty jokes. I think we had Johnny Carson’s audience that night, the way they laughed.

... It would have been a terrible shame if after all this time we had missed seeing Maria von Trapp in-person. I suspected that it was only because of Julie that we were there.
This would be one of my treasured memories.

Next – Julie’s Special Guest – Maria von Trapp
A list of The Julie Andrews Hour blogs with links to this page can always be found on:    http://www.JulieAndrewsHour1972.com

Note: All photos here are for entertainment purposes only

Posted by Michelle Russell at 5:43 PM