Today I was off to Julie’s again, but before that, I went to my theatre class and did a pantomime scene... After that I had speech class. Our teacher, Mrs. Baker, gave us different vocal qualities to practice. Some of the voices sounded like Alice Ghostley and some like Katherine Hepburn. It was amazing.

Then, I hurried to the studio. At the gate, the guard on duty questioned me, and I almost didn’t get in. I arrived at Studio E at . It appeared they were  beginning the taping late today.

When the girl I met last time, Vivian, came in, she asked me to sit next to her, but she was sitting in the front row and I didn’t want to sit that close. Instead, I sat one row back. Vivian introduced me to “Patty," a young girl with has red hair and freckles whom she'd told me about last time. Like Vivian,  "Patty" was only fifteen. Patty liked to laugh and watched everything with eagle eyes. There were a couple of other girls there as well, but I didn’t meet them. 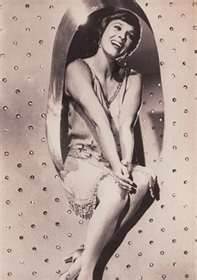 The scene they were going to tape was already set up when I arrived. It was a party scene. The set contained a room with walls that slid in and out for the camera. The room had a sofa, white grand piano, and other furniture.

Sitting down in the second row, I leaned over the front row to Vivien and said, “I’m so glad to be here!” I didn’t realize that Julie was standing on the stage, directly in front of us, wearing “roaring 20s” flapper dress. Just then, she looked down at us, struck a pose and said, “Hi there!”
(What she said sounded like, “Hi-o theh” –a sort of 20s accent.) She was goofing off. The girls in front of me got very excited that she had spoken to them, and said “Hi” back to her, one after the other.

The scene they were about to film was a tribute to the music of British playwright and songwriter, Noel Coward.

Noel Coward, born in a suburb of made his professional debut at the age of eleven. As a teenager, he began writing both plays and songs. During his lifetime he published over fifty plays and was revered for his work. He was also a very good friend of Gertrude Lawrence, whom Julie Andrews played in the film Star! On , only four months after this show was taped, Coward passed away at his home in .

The taping began with the most beautiful music, “I’ll See You Again,” a song written by Noel Coward in 1928 for the light opera Bittersweet.  Julie sang the song, and she was in wonderful form; the music just flowed from her. I wished she would sing it all night.

Today, I especially loved watching Alice Ghostly. She looked so good and sang so well.  After her performance, she came down and sat two seats from me.
“Hi girls, how are you?” she asked. “Did you like the scene?”

There was a point during this Noel Coward scene where Julie had to act dizzy and fall on a sofa. Then, one of the guest stars (not sure which) sang “Poor Little Rich Girl” to her.  After that, Julie had to fall down and then get up with a carnation in her mouth....  But she was in great form today and hit her high notes so easily.

After the Noel Coward scene, I had to leave for class...

I rushed back to The Julie Andrews Hour where they were working on a new scene. In this scene, Julie had to say: “I’m bored. Do something to entertain me.”

Tony Randall and Keith Michell were there.

In the scene they were taping when I arrived, Keith was supposed to take his handkerchief out and lean Julie down against a bar or something. As he did this, director Bill Davis called, “Hold!”
Julie and Keith were mouth to mouth. They held. But Julie’s back hurt and she was slipping!....

At one point during this part of the taping, Julie had to squat down on the ground to avoid having the camera see her. Then, she danced with a pink carnation in her mouth. Afterwards, she had to take a bite of the carnation and eat it!
Once again, they did take after take of the scene.
“One more take, Julie,” called the director.
“Oh no! Not another,” cried Julie, “I despise carnations, I prefer geraniums.”
...
“Alright,” said the director, sternly, “Settle down!!!”
This was directed at Julie.
“What?!” asked Julie, innocently.
“Settle down!”
She giggled, and we all laughed as she skipped across the stage. How could anyone be mad at this delightful star!

Please note: Toward the release of a book on The Julie Andrews Hour and the author's experiences there, we are only including excerpts here.

Tony Randall was born in on . He attended and then moved to where he studied at the Neighborhood Playhouse under Sandford Meisner and choreographer Martha Graham.

During the 1930s and 40s, Randall appeared onstage in many minor roles, working with such legendary actresses as Jane Cowl, Ethel Barrymore, and Katharine Cornell. In the 1950s, he began working in television. Two years before his appearance on The Julie Andrews Hour, Tony Randall had taken the role of Felix Unger in the television adaption of the Broadway play, The Odd Couple. He starred opposite Jack Klugman.

Keith Michell was born in . He made his stage debut there in 1947 and by 1951 was appearing in . During his career, he appeared in several musicals, most notably Man of . Michell starred in the first production of the musical.

Keith Michell is a renowned Shakespearean actor, having worked at the Shakespeare Memorial Theater. He is also known for his television work, including Henry VIII in The Six Wives of Henry the VIII and Heathcliff in .

You may find a complete list of The Julie Andrews Hour blogs and links at:
http://www.julieandrewshour1972.com

If you would like to see The Julie Andrews Hour released on DVD, as well as the music from the show with Julie and her guests, please send a respectful e-mail to Dan Gopal, Global Products ITV:    dan.gopal@itv.com

Please Note:  All photos used here are for Entertainment Purposes ONLY.
In some cases, the names of persons written about here who were not in the show have been changed. The story of this day will be told in three parts
Posted by Michelle Russell at 9:05 PM